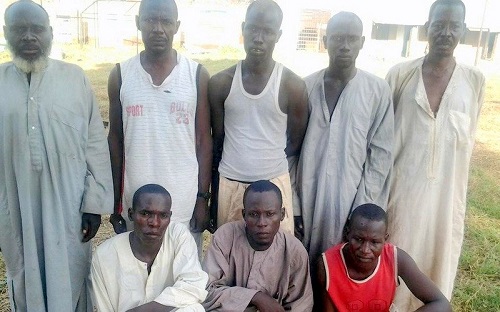 The Joint Task Force (Operation Salama) in Jigawa, has arrested 10 suspected suppliers of fuel to Boko Haram members in Birniwa local government area of the state.

Brig.-Gen. Hamisu Hassan of Command 3 Brigade of the Nigerian Army, in charge of Kano, Katsina and Jigawa states, made the disclosure on Friday while parading the suspects in Birniwa town.

He said that the suspects were nabbed while filling their jerry cans with petrol at midnight of Thursday in Birniwa.

He said that the suspects were arrested based on surveillance and intelligence report.

He said that due to the ban on the sale of petroleum products in jerry cans in Yobe, Borno and Adamawa, the suspects travelled to Birniwa in Jigawa to buy the fuel.

Hassan said that preliminary investigation revealed that some of the suspects were from Nguru while the others were nationals of Niger Republic.

He said that two of the 10 suspects were minors below the age of 14.

The Commandant said that the suspects would be handed over to relevant security agencies for further investigation.

He warned owners of filling stations not to sell fuel in jerry cans which could be used to aid the activities of Boko Haram insurgents.

Hassan appealed to state governments to cooperate with the Army to combat insurgency in the country.

He reiterated the determination of the Nigerian Army to end insurgency by the December deadline set by President Muhammadu Buhari.