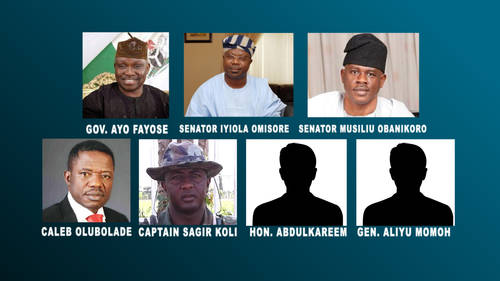 The Nigerian Army on Tuesday said it had constituted “a high powered” Board of Inquiry to probe alleged malpractices and involvement of its personnel in the 2014 Ekiti and Osun States governorship elections.

Earlier this year, audio recordings and transcripts of secret meetings between some prominent chieftains of the Peoples Democratic Party, PDP, and some army officers on how to use the military to rig the gubernatorial elections in Ekiti and Osun States in 2014, were uploaded to the internet.

The audio recordings were made by an army intelligence officer attached to the 32nd Artillery Brigade stationed in Ekiti State Capt. Sagir Koli, who has since fled the country for fear of retaliation.

Capt. Koli secretly recorded the conversation on the eve of the June 21st election when he was asked to accompany his Commanding Officer, Brigadier General Aliyu Momoh, to the Spotless Hotel in Ado-Ekiti, venue of the meeting with the PDP leaders, which included then Minister of State for Defence, Musiliu Obanikoro, Police Affairs Minister Jelili Adesiyan, PDP chieftain Iyiola Omisore, then PDP governorship candidate Ayo Fayose, who went on to win the polls.

The PDP also tried to replicate the success of the Ekiti plot in the August 9, 2014 governorship election in Osun, but was strongly resisted by the Rauf Aregbesola-led All Progressives Congress government.

Since the exposé, there had been calls by the then opposition APC and civil society organizations for the federal government to investigate the matter and prosecute those identified in the recordings.

Several months after the audio file was leaked online, the spokesman of the Nigerian Army, Sani Usman, said on Tuesday that the board would investigate the alleged unprofessional and unethical conduct of some Nigerian Army personnel during the two elections.

He, however, did not name the panel members.

Usman, a Colonel, said: “The Nigerian Army has set up a high-powered BoI to investigate among other things alleged malpractices and involvement of its personnel in Ekiti and Osun States governorship elections in 2014.

“The BoI is to investigate the alleged unethical conduct of some Nigerian Army personnel in Ekiti and Osun States’ Gubernatorial Elections 2014, as well as in any other state in Nigeria where other allegations of misconduct were made during the 2015 general elections.

“As part of its terms of reference, the BoI is to also review the involvement of the Nigerian Army formations/units and their personnel in elections and other duties in aid to civil authority.

“The essence of the Board is to prevent future professionalism conduct by officers and men in the performance of their constitutional roles while strengthening Nigerian Army’s support to democratic values and structures in Nigeria”.