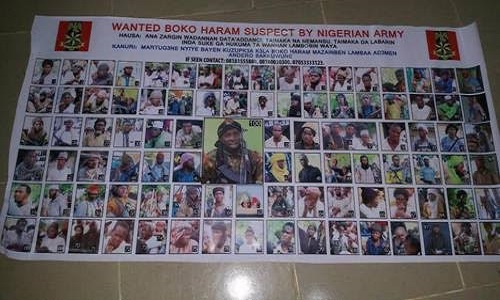 Their arrest, he said, would help in the final push against the terrorists in the Northeast.

The army chief spoke at the Maimalari Barracks in Maiduguri, Borno State, headquarters of the 7 Division.

Buratai displayed the photographs of the wanted men and sought public help in getting them.

“The fight against Boko Haram insurgency is a collective responsibility of all, including the media. These photographs of terrorists’ suspects are to be identified with their numbers attached to each of the 100 photos, while members of the general public could send in more information on the locations or whereabouts of these Boko Haram sect members that appeared in these special photo identifications. Each of the suspects must have either participated or be involved in the ongoing war in the theatre operations of Lafiya Dole.

“If any member of the general public identifies the location and whereabouts of these suspects, please contact these three telephone numbers in this launched anti-terrorism campaign materials in Maiduguri, the Borno State capital”.

Gen. Buratai announced what he called a handsome reward for any person with useful information that would lead to the capture of the wanted terrorists.