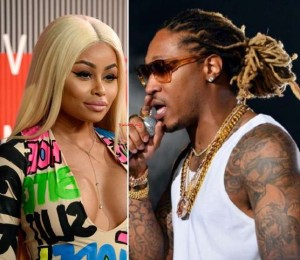 New reports say that Blac Chyna and Future are reportedly getting frisky together.

The pair were spotted getting cozy at his after-party in Washington DC earlier this month and eye witnesses claim it looks more than just a friendly hangout.

According to TMZ, both celebrities were practically inseparable the entire night at Future’s raucous after-party and reportedly stayed at the joint for an hour before leaving together at 4:00am.
This sighting comes just one day after Blac Chyna was seen on the set of Future’s new music video for ‘Stick Talk,’ reports AllHipHop.

Apparently, Blac and Future left the set of ‘Stick Talk’ together too.

This pairing could definitely be healthy for both Blac and Future, and a serious relief for their exes considering that Blac has waged a war against Tyga and his girlfriend Kylie Jenner, 18, ever since they got together. Future has also attacked his ex, Ciara and her boyfriend, Russell Wilson