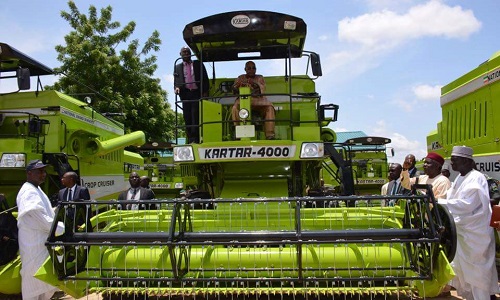 The Borno State government on Friday said it had invested over N15 billion in agriculture as part of efforts to revolutionise the sector in the state.

The commissioner for agriculture in the state, Muhammad Dili, disclosed this in an interview in Maiduguri.

Mr. Dili said the state governor, Kashim Shettima, had laid a foundation for smooth take off of all relevant state agricultural programmes.

He said the state government had, in the past two years, trained over 100 youths in various agricultural skills, with a view to boosting employment opportunities among the teeming unemployed youths.

The commissioner disclosed that the state government had equally imported about 500 rice mills from Thailand as part of its efforts to boost rice production in the state.

According to him, the mills would be distributed to farmers’ cooperative associations to improve the quality of local rice production in the state.

Mr. Dili explained that the state government had also purchased about 1,000 tractors that would be distributed to peasant farmers across the 27 Local Government Areas in the state.

“Plans are underway to provide appropriate infrastructure to enhance fish production in the state.

“The state government will also build about 40 artificial dams in 50 communities across the 27 Local Government Areas to boost fishing activities.

“We are geared towards promoting sustainable food production, providing technical and social support to the farming communities in order to improve their living standards.

“Some of the communities to benefit include Bama, Baga, Damboa, Kwaya Kusar, Minor, Minoc, Benishaik, Jakana, Magumeri, Auno, Kala Balge, among others.

“Our farmers in Magumeri and Damboa are also good producers of groundnut.

“We already have about 550 hectares of farmland on which to grow crops as soon as the Boko Haram security challenge is over”, he said.