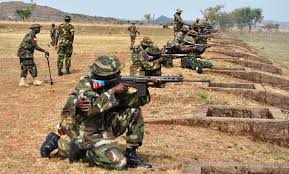 The British Military Advisory and Training Team (BMATT) has organised a five-day capacity training seminar for 150 Warrant Officers and Non-Commissioned Officers of the Nigerian Army, as part of the collaborations between Nigeria and Britain in tackling Boko Haram insurgency in the northeast, as well as similar security challenges across the country.

The commandant of the Nigerian Army School of Infantry, Major General Sani Muazu, made the disclosure on behalf of the Chief of Army Staff, Lieutenant General Tukur Buratai, at the seminar held at the Armed Forces and Staff College, Jaji in Kaduna State on Tuesday.

According to him, BMATT has been assisting Nigeria in the capacity building of its military forces in the areas of tactics for over 35 years.

He explained that the seminar would focus on the operation development of the officers, with the aim of making the Nigerian Army a professional force.

Buratai added that the Army had in the last one year embarked on intensive individual and group training of personnel within and outside the country. He affirmed that such initiative was already yielding positive result with the recent onslaught against the Boko Haram insurgents.

He, therefore, urged the participants to make use of the opportunity of the training to increase their capacities and knowledge in dealing with all forms of security threats such as the Boko Haram insurgency, militancy, oil bunkering and kidnapping among other related crimes.