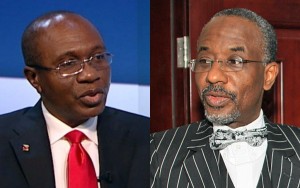 Former Governor of the Central Bank of Nigeria (CBN) and Emir of Kano Alhaji Muhammadu Sanusi II, has called on his successor Godwin Emefiele to devalue the naira. He also warned that the Nigerian economy is in danger of a long term slump unless the government confronts slowing growth.

“Let’s stop being in denial, we cannot artificially hold up the currency,” Sanusi said in a speech he delivered on Thursday in Lagos, aired on CNBC Africa. He said President Muhammadu Buhari “needs help on the economy,” he said.

Under Emefiele, the CBN has curbed dollar funding since March, virtually fixing the exchange rate. Limiting access to dollars has stabilized the naira, which has closed at about 198-199 per dollar since declining about 8 percent in the first quarter.

The central bank’s rationing of hard currency and restrictions on foreign-exchange trading are hurting the economy, said Sanusi. The economy expanded 2.35 percent on an annualized basis in the second quarter, the slowest pace since at least 2010.

“We are depriving certain key industries of imports,” he said. “If we have to make a choice between economic growth and a devaluation, my recommendation is that we protect growth.”

“Monetary officials should lower the key interest rate from a record high of 13 percent to help stimulate the economy since the government lacks the funds to boost spending in the face of lower oil prices,” Sanusi said.

“The portfolio flows are gone,” he said. “Inflation is already upon us. You have fiscal consolidation. It is time to loosen monetary policy. Otherwise we compound an exchange rate crisis for businesses with high borrowing costs and declining demand.”

Portfolio investors have fled Nigeria, with foreign holdings of naira government bonds falling to less than 10 percent of the total from 27 percent in 2013, according to Standard Chartered Plc.

Sanusi also called on the ministers who will serve in Buhari’s cabinet not to act like “courtiers.”

“I hope people will have the courage to know that loyalty is about telling your boss the truth,” he said.