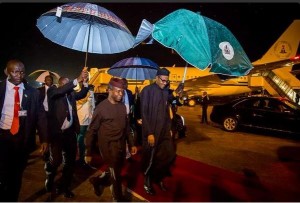 The presidency has disowned one Gideon Samani who introduced himself as Senior Special Assistant to the president on Political Matters at the fifth annual lecture series organised by the Change We Need in Nigeria group which held in Abuja on Thursday.

Speaking at the event, Samani, who was reported to have represented the Secretary to the Government of the Federation, Mr. Babachir Lawal, said that the president did not include many women in his cabinet because he is “very shy dealing with the opposite sex”.

The presidency however disowned him and described his statement as fallacious.

In a statement issued on Friday, the Special Adviser to the President on Media and Publicity, Mr Femi Adesina said the attribution of the supposedly “low number” of female ministerial nominees to Buhari’s alleged shyness around women was baseless and a figment of the imagination of the man.

“The assertion by the alleged presidential aide that President Buhari is ‘very shy dealing with the opposite sex’ because ‘he has been interacting mostly with men’ was received by the President with shock and consternation.

“For one thing, there is no Senior Special Assistant, Political Matters, in the office of the President for now and Mr. Samani who was said to have spoken as the representative of the Secretary to the Government of the Federation at a public function on Thursday, is not an aide of the President,” the statement read in part.