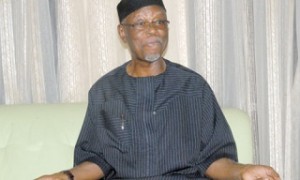 National Chairman of the All Progressives Congress (APC) has said that the soon-to-be inaugurated Ministers are men of integrity and intellect, as shown in their performances at the Senate screening.

Oyegun spoke at APC national Secretariat on Tuesday night when he received a delegation of University of Ibadan (UI) Alumni Association, led by its national President, Dr Kemi Emina.

“Even though I am an insider, I must also confess that the quality of the ministers that are coming on board has far exceeded my expectations, especially watching each of them perform at the Senate screening and that has been a thing of joy.

“These are people of experience, people of intellect, people of passion, people of commitment to the new nation that the Buhari administration has committed itself to establishing.

“All these have disappeared from our national life. It is not really the issue of building bridges, building roads and massive structures. The damage has been to the psychic of the average Nigerian; the young Nigerian no longer know the difference between right and wrong.

“Today, all that is important is that once you have money and you are powerful, you can do anything and get away with it. That has to change and that is the difficult challenge we have to face in the remaining three and half years we still have ahead of us,” he said.