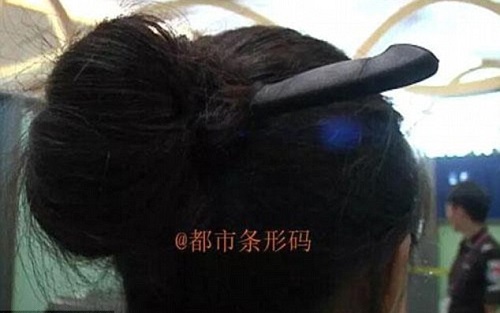 Just as we have ladies with good heart like the Paramedic, so also we have bad types with black heart.

A Chinese passenger tried to take a fruit knife on the plane by hiding the three-inch-long blade in her hair. Her trick was however discovered when she went through the metal detector at Kunming Changshui Int’l airport, southwest China, on October 6, 2015.

Maybe there is a man on that plane she was trailing and would have used the knife to stab?

A female office was seen examining the passenger’s head and found that a knife had been concealed. The knife was taken from her and confiscated.

Funny enough, the middle-aged lady claimed she wanted to use the knife to cut fruit while waiting to board the plane. The bizarre scene was captured by a security camera at the airport’s gates.
As seen on camera, she deliberately touched the knife to make sure her bun was in place before going through the security gate. Unfortunately for her, the alarm went off as she passed the metal detector.
Source: Olufamous