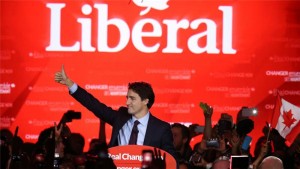 Justin Trudeau is set to become Canada’s new prime minister after his Liberal Party swept to power in general elections, ending nearly a decade of Conservative Party rule. The Liberals seized a parliamentary majority, an unprecedented turn in political fortunes that smashed the record for the number of seats gained from one election to the next. Aljazeera reports:

The Liberals had been a distant third place party in parliament before this election. Prime Minister Stephen Harper conceded defeat, ending his government’s nine-year run in power and the 56-year-old’s brand of fiscal and cultural conservatism.

Trudeau, 43, the son of former Prime Minister Pierre Trudeau, pledged to run a $7.7bn annual budget deficit for three years to invest in infrastructure and help stimulate Canada’s anaemic economic growth.  This rattled financial markets ahead of the vote and the Canadian dollar weakened on news of his victory.

Trudeau has said he will repair Canada’s cool relations with the Obama administration, withdraw Canada from the combat mission against the Islamic State of Iraq and the Levant (ISIL) group in favour of humanitarian aid and training, and tackle climate change.