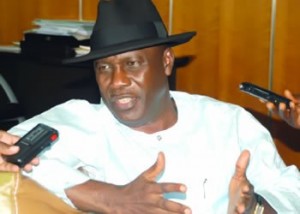 Former Minister of Niger Delta Affairs, Elder Godsday Peter Orubebe, has denied charges against him before the Code of Conduct Tribunal (CCT) sitting in Abuja.

Reacting to the allegations, Orubebe said he will address the media tomorrow.

He said he did not demand and collect bribe of N70 million from a contractor handling a skill acquisition project for the ministry when he was minister and does own the plots of lands in Asokoro and Kyame, as alleged.

“I cannot lay claim to plots of land I had since donated to other people and moved on in life.

“I have an image and integrity to keep and none of the people who know me can say that I have ever collected a bribe from anyone,” the former minister said.

The charge against him which is dated October 8, was signed by a senior legal officer at the Code of Conduct Bureau (CCB), Mr. Peter Danladi.

FG alleged that the former minister pocketed a bribe of N70m that was given to him by one Pastor (Dr.) Jonathan Alota, the owner of a company, Chemtronics Nigeria Limited, that benefited from contracts that were awarded by the Ministry of Niger Delta Affairs, whilst Orubebe was in office.

He is to appear before the CCT on November 9.