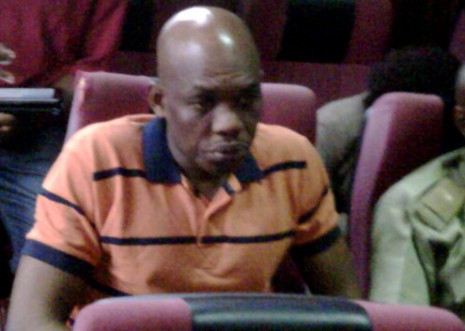 Charles Okah is the younger brother of the former leader of the Movement for the Emancipation of the Niger Delta (MEND), Mr. Henry Okah (currently incarcerated in South Africa). He has been in prison for four years now over allegations of conspiring to kill the former President Goodluck Jonathan when Nigeria marked her 50th independence anniversary in Abuja.

Okah, who is frustrated by the slow pace of his trial sought the permission of the trial judge, Justice Gabriel Kolawole to air his views over what he termed “endless trial”, due to his lawyer’s absence in court.

Justice Kolawole obliged, after which he spoke for about five minutes before attempting to end his own life.

“I have been incarcerated for about five years now, and I have a family to cater for,” Okah reportedly screamed while speaking.

“My children would grow up without feeling the warmth of their father.

“I’m tired of this endless trial”.

He then grabbed a nearby chair with which he made repeated attempts to break a window in order to create an opening through which he could jump down from the courtroom located on the third floor of the five-storey building. The chair with which he attempted to break the window was later collected from him after he was overpowered and Justice Kolawole promptly adjourned the case till October 20.