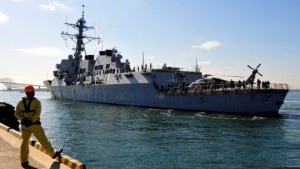 Editorials in Chinese state media have denounced the presence of a US warship in theand warned that Beijing is prepared to take action.

While urging calm from both sides, media outlets also said the US was “harassing China” and that Beijing is “not frightened to fight a war”.

The USS Lassen sailed in the Spratly archipelago on Tuesday as a challenge to China’s claim over the islands. China condemned the move and summoned the US ambassador in a show of protest.

China claims sovereignty over much of the South and East China seas.The guided-missile destroyer USS Lassen breached the 12-nautical mile zone that China claims around the Subi and Mischief reefs in the Spratly archipelago.