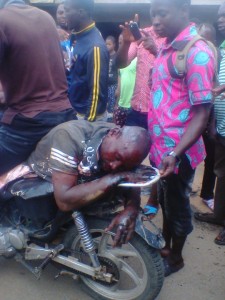 It was a case of double tragedy along Abu King Shuluwa road, Makurdi when a thief was involved in an accident while trying to escape after stealing a motorcycle and at the same time, was given the beating of his life.

Benue.com.ng gathered that the thief had approached an unsuspecting commercial motorcycle (okada) rider to take him to Tse-Ayihe, a suburb on the outskirts of Makurdi.

On reaching the place, he forcefully snatched the motorcycle and tried to run away, but the okada rider raised alarm and his colleagues who were nearby started chasing after the thief.

As the thief was running on top speed, he crashed into speed bumps and was badly injured, but that didn’t prevent the mob from beating him to pulp before someone informed the police who came and whisked him away to their station.