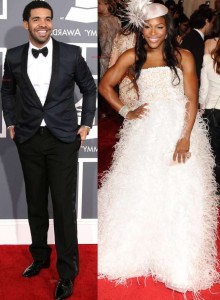 Superstar rapper, Drake and his girlfriend Serena Williams have been in the news recently over an alleged engagement.

According to the Canadian rapper’s rep, “there was no ‘I do’ and there was no bended knee and no proposal,” because they are both still single!

According to Hollywood Life, Drake proposed to Serena in Toronto, Canada in the most romantic way possible when he took her home to mama!
The couple visited the rapper’s homeland in September after Serena lost her fourth Grand Slam title at the 2015 U.S Open.

Unfortunately for some fans, Drake’s rep tells TMZ, “The rumor is completely untrue.”

The two have been spending a lot of time together lately — and finally busted out the PDA in September … so, it’s probably not entirely out of the question.