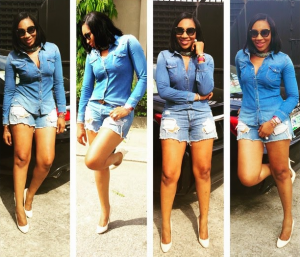 In a new interview with The Punch, very sexy Nollywood actress, Ebube Nwagbo has opened up about what she feels her greatest body asset is.

My name is Ebube Nwagbo; I am an actress and an entrepreneur. I am from Anambra State but I was raised in Warri, Delta State. I am the first child and I have five siblings. I studied Mass Communication at the Nnamdi Azikiwe University, Awka, Anambra State.

I was 20 when I began acting in Nollywood in 2003 and I also began to cater for my family and myself around the same time. A friend invited me to audition for a role and it was my first attempt. Luckily, I clinched the role. In no time, Nollywood became a part of my family because I spent a lot of time with my fellow actors and crew. The journey has so far been smooth, rough, sweet and bitter, but I am thankful to God for where I am today.

When I began acting, I did not inform my parents because I knew there was no way they would support me. My dad returned home a certain day and said he saw a movie poster of a girl that looked like me, but I feigned ignorance. I was scared to tell him I was the actress in question. I quickly left home before it was released, because I was still unsure of what my parents’ reaction would be when they eventually discover that I was an actress. Thankfully, I played a decent role in the flick and my parents were pleased with me. I did not give them any reason to be angry, upset or disappointed in me. I do not think I have given my family a reason not to be proud of me as an actress. I have made them proud in many ways and they have given me their love and support.

I floated a hair extension line because of my love for beauty. Also, I wanted to invest my money into a business that would flourish. So far, it has been very rewarding and I am proud of how far I have come in the business. We have grown tremendously over the years, beyond my expectation.

Most people tend to believe that actresses portray their real lives and personalities in the kind of roles they play in movies. But, that is not really the way it is. An actor’s personality in real life is totally different from what they see onscreen. It is just a job and must be done.

Fame has robbed me of my privacy. If I were not an actress, I would have been a journalist.

I have always believed in love and still do believe in love. I don’t know about being lucky or unlucky with love. Love is always a beautiful thing. I am not looking for any particular quality in a man. The important thing is how I feel about him.

My latest projects are the Nigeria Teens and Twenties Audition. We will be touring 20 states of the federation to search for the next big thing in Africa. I am also filming a new movie at the moment. Also, I recently shot the second movie from my company, PoshWorld Productions. It is entitled Not Enough. I starred in the movie alongside other actors like, Oge Okoye, Alexx Ekubo, Tina Amuziam, and Bassey of the Big Brother Africa fame. It was directed by Afe Olumowe and is currently undergoing post production. It will be hitting the cinemas soon.

My greatest asset should be my body. My hip is my greatest body asset.

My style is very classic, simple and daring. It has also evolved over the years. I wouldn’t be caught wearing loud colours or a matchy outfit because it is not my style. My favourite fashion accessory is my sunglass and I can’t do without it. I love it because it compliments and completes even the simplest look. I hardly wear make-up, so, my sunglasses serve as a protection of some sort for my face. It also shields my face away from prying eyes. Those are some of the reasons why I consider it to be my favourite accessory.