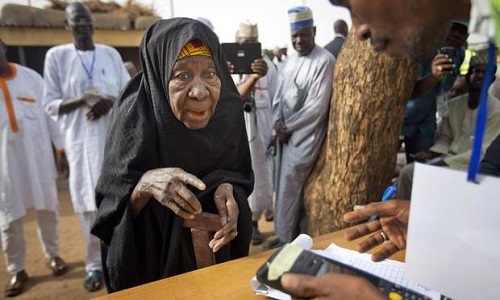 The Independent National Electoral Commission said the elderly and disabled persons would be accredited and allowed to vote first during the governorship election holding in Kogi State on November 21.

The state’s Resident Electoral Commissioner, Halilu Pai, announced this at a forum in Lokoja on Wednesday.

He said the decision was to ensure that no eligible voter was disenfranchised during the elation.

Mr. Pai, who restated the readiness of the commission to conduct a free and fair election, said 47,389 new voters had been registered in the state and that the newly registered persons would receive their Permanent Voter Cards before the election.

The commissioner said the recent audit of PVCs carried out by the office indicated that 1.9 million PVCs have been distributed, while 308,159 remained uncollected.

He said that the commission would embark on voter education and enlightenment in due course and urged stakeholders, including the media to be part of this.

The state’s Commissioner of Police, Emmanuel Ojukwu, said hot spots and elements considered to be security threats to the coming election had been identified.

He said the police would soon move against identified potential troublemakers and promised to provide security before, during and after the election, in collaboration with other security agencies.

He added that the police would mount aerial surveillance of nooks and crannies of the state to forestall violence and provide security at collation centres.

The state’s Director of National Orientation Agency, Ibikunle Medupin, leaders of political parties, women groups and representatives of civil society organisations who spoke at the event applauded INEC over the arrangements being made.