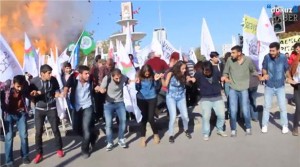 Two explosions have rocked a road junction in the centre of the Turkish capital Ankara, killing at least 20 people and injuring dozens of others, local media reported.  The explosions took place several minutes apart, with the first going off at around 10:00am (0700 GMT), according to local Dogan news agency.

The explosions occurred near a train station where people were gathering for a peace march to protest against the conflict between the state and Kurdish fighters in southeast Turkey. Eyewitnesses told the AFP news agency several bodies were seen lying on the ground.

The anti-government peace rally was being organised by leftist groups. The Turkish government said it was a “terrorist attack” and said it was investigating claims that suicide bombers were responsible.  Turkish Prime Minister Ahmet Davutoglu was to hold a meeting with security chief after the blast, the prime minister’s office said.