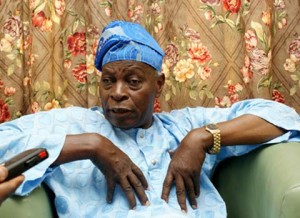 Former Secretary to the Government of the Federation (SGF), Chief Olu Falae, yesterday revisited his recent ordeal in the hands of kidnappers, saying the incident remains a blessing until the Yorubas are liberated from Fulani herdsmen attacks.

The former presidential candidate told a delegation of the Oodua Peoples Congress (OPC), led by Otunba Gani Adams, at his Akure residence in the Ondo State capital that contrary to claims by the Department of State Services (DSS) that the abductors were mere criminals looking for money, they were determined to kill him.

“They were not after money alone; they wanted to eliminate me by shooting my car, thinking I was inside the car”, he said.

“They later walked into my office with their sharp knives and cutlasses and started attacking me before taking me into the bush. We trekked from Akure to Owo, following bush paths and swampy areas on my bare legs till we got to an area close to Ifon in Ose local government”, Falae recounted.