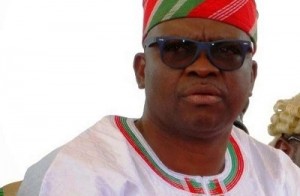 The All Progressives Congress (APC) in Ekiti State has expressed outrage over attacks on Nigerian judges by Governor Ayodele Fayose, who alleged that judges heading election petition tribunals were being manipulated to deliver verdicts in favour of the APC.

The Publicity Secretary of the APC in Ekiti State, Taiwo Olatunbosun, said in statement in Ado-Ekiti that it was an irony that Fayose, “who is a beneficiary of lawless and anti-democratic conduct and a principal participant in the ignoble plot to spit on the Nigerian Constitution and who should be cooling his heels in jail” should be the one accusing the judiciary of corruption.

“We never knew that Fayose would be the one accusing anyone of using the federal might to an electoral advantage.

“Where is Fayose’s conscience taking into consideration the impunity with which the Nigerian Army officers and men were used by President Goodluck Jonathan’s administration to intimidate the opponents to enable Fayose win the June 21, 2014 Governorship election in Ekiti State?

“It is baffling that the same Fayose is the one now accusing without proof that Buhari is using the federal might to manipulate the judges to cancel the Rivers and Akwa Ibom elections, which all Nigerians and the world condemned as the worst in the history of the nation.

“It is regrettable that Fayose is always having his jokes on the judiciary that decent Nigerian leaders built to serve as a sacred sanctuary of justice, but which Fayose has turned to a lap dog that he can whip at his pleasure.

“He invaded the court with his thugs to beat a judge black and blue, tore his coat and stormed the Chief Judge’s office, broke the door and tore court records there while the Chief Judge’s secretary was mercilessly beaten.

“He created various obstacles to slow down his prosecution in the N1.3b poultry project fraud trial by the EFCC and orchestrated closure of the courts for a long time to prevent hearing on his perjury case to pervert the course of justice. But we wish to remind Fayose that these various assaults on the judiciary are worse than corruption,” Olatunbosun said.

The APC noted that a probe of the Ekiti election scandal by a Board of Inquiry (BOI) set up by the Nigerian Army to investigate the roles of its men during the June 21, 2014 elections which saw Fayose’s emergence as Ekiti State governor, would reveal the roles of the military officers and soldiers of the Nigerian Army in the 2014 contentious governorship election.

“Nigerians and indeed the international community are interested in how other dramatis personae whose voices were heard in the audio tape secretly recorded by an Army Intelligence Officer, Captain Sagir Koli, will be made to account for their roles in their unlawful and criminal, anti-democratic conducts,” he said.

“The APC as a party will continue to circulate the audio tape that reveals the details of the evil plot of how Ekiti was thrown to the dogs so that the whole world will know the identities of the criminals who will not allow the law to work but will now turn around to accuse the judiciary of constituting a threat and road block to justice administration through corrupt practices.

“We want the Army and Federal Government to pursue this matter to a logical conclusion to make sure that never again shall criminals posing as national leaders and other political locusts ravage our democracy as was done on June 21, 2014,” Olatunbosun concluded.