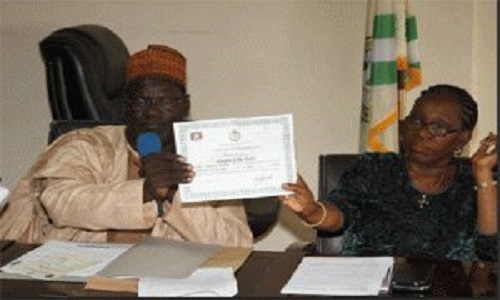 The Federal Government, Tuesday, unveiled newly improved National Youth Service Corps (NYSC) certificates to be issued to corps members at the end of the mandatory one year service to their fatherland.

The Director General of the NYSC, Brig-Gen. Johnson Olawumi, who spoke at the unveiling ceremony in Abuja, said the scheme took the step to wage war against forgery and impersonation.

Represented by the Acting Director of Certification, Alhaji Aliu Daura, the DG explained that the new certificate would be embossed with the carrier’s photograph in line with the global best practices.

The issuance of the new NYSC certificate, Olawumi said, would take effect from Batch ‘C’ 2014, who will be passing out on 15 October.

“In our concerted effort to make the operation of the NYSC conform with global best practices, the scheme engaged in the holistic e-nysc solution with effect from Batch ‘C’ 2014 where prospective members register online before proceeding to the orientation camp. This resulted in the enhancement of issuance of NYSC certificates namely; Certificate of National Service, Certificate of Exemption and Letter of Exclusion.

“With effect from Batch ‘C’ 2014, all certificate of National Service bear passport photograph of the corps members at the upper right hand corner of the certificate.

“This is to guarantee the security of our certificates from forgery and to block all chances of impersonation. Therefore batch ‘C’ 2014 corps members, who are due to pass-out on 15 October, 2015 will have their certificates embossed with their photograph”, he stated.