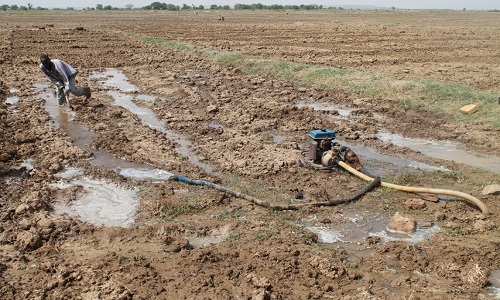 Governor Aminu Tambuwal of Sokoto State has disclosed the state government’s plan to engage in massive dry season farming in order to tackle food shortage and mitigate the effect of this year’s flood, which destroyed farmlands in different parts of the state.

As part of measures to actualize the plan, the state government said it will distribute assorted fertilizers and other farm implements for dry season farming so as to encourage them to engage in irrigation farming.

A statement issued by his spokesman, Imam Imam, on Saturday, said that Tambuwal disclosed this when he received the members of some farmers’ groups who visited him.

The statement quoted Tambuwal as saying that “the state government will in this direction purchase assorted fertlizers and sell same to the farmers at‎ highly subsidized prices”.

“We will also buy other agricultural inputs and implements that will be distributed to our farmers.‎ The state government will also sustain its gesture of buying improved seeds and seedlings, pesticides and herbicides, among others”, he promised.

Gov. Tambuwal further explained that his administration will sink adequate tube-wells for the farmers, construct more earth dam and water silos to conserve water for the farmers.

“This proactive action is aimed at supplementing for these huge‎ losses to avert food shortages this year and beyond”, he added.