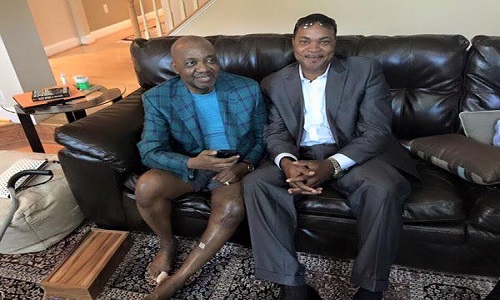 Immediate past Vice President of Nigeria, Arc. Namadi Sambo, is currently recuperating from a knee surgery carried out by doctors in the United States to save his left leg from being amputated.

Sambo, said to be in the Washington, DC area after a surgery to repair a severe knee ligament disorder that almost completely damaged his left leg, had not been sighted in public since leaving office along with former President Goodluck Jonathan in May, 2015 until this recent photo of him surfaced online.

The former vice president was said to have consulted several hospitals in the U.S before he was admitted by a DC-area hospital for an extensive ligament reconstructive surgery, which took place in mid-August.

As a result of the surgery, Mr. Sambo underwent intensive rehab for several weeks. “He was not able to walk for some weeks due to the nature of the surgery”, said a source.

It was reliably learnt that the former vice president remains in the Maryland area where he continues to recuperate and to undergo extensive physiotherapy to help restore his ability to walk normal again.