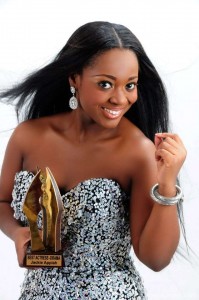 It might be a while since she made a big appearance in a movie, but she’s still leaving large.

After the rough and tumbles of her failed marriage with her ex-hubby few years back, this shows that all isn’t that bad for Jackie.

The Ghanaian’s beautiful actress shared a sneak peek of her living the good life on social media with a snap behind her newly acquired 2015 Mercedes-Benz G-Class, with a customized Plate number – JACKIE 5-15.

However, earlier in the year there were unconfirmed rumors that the Still Standing actress was in a relationship with Nollywood actor, Bobby Obodo but the Nollywood star quickly quenched that rumor In an exclusive interview.