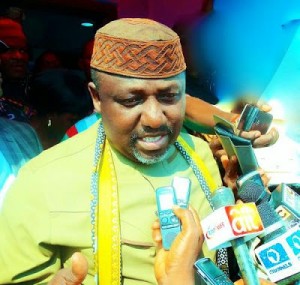 Imo State Governor, Rochas Okorocha yesterday urged the chairman and members of the Revenue Mobilization and Fiscal Commission (RMAFC) to, as a matter of urgency, review downward the salaries and allowances of the President, Governors, National Assembly members, and all other political office holders both elected and appointed, by at least 50 percent, so as to make the offices less attractive and check the excesses that go with the fat payments for such offices. However, as good as one would have expected this suggestion to be to Nigerians giving the dire condition the country’s finances is, it surprisingly did not go down well with them as shown by an opinion survey carried out by INFORMATION NIGERIA. We’ve put together some of these opinions below:

Egwuatu U Onyejelem was of the opinion that Governor Rochas should remove the log in his eye before he attempts to remove the pebble in someone else’s eye. He said “Take care of Imo State first; start the pay cut by honestly cutting the salaries of the governor and deputy, as well as members of the House of Assembly with a state policy/ act that would channel the excess to a noble course. Then, let others learn from your example. Howbeit, let all hidden channels of fraud to cover up the lower pay be blocked. May the LORD bless you as you do this in Jesus Name!”

Paul Chinedu N whose opinion showed how displeased he is with the suggestion asked a rhetorical question; “What is salaries and allowances compared to what governors are looting?” The suggestion to slash the salaries will not yield the desired result of making these offices less attractive was the opinion of Dike H.E. He went on to opine that “what makes those offices lucrative has nothing to do with their salaries, as a matter of fact, even if they should forfeit their entire salaries, anyone occupying such positions will be living as flamboyant as they’re doing now”.

Emmanuel Ikenwe on the other hand does not think the suggestion of downward review of the salaries of political office holders is entirely a bad idea, rather he said “the suggestion to review downwards the salaries and allowances of political office holders is okay. However the actual looting of our collective wealth is through awards of inflated contracts and oversight functions”.

Majority of the respondents in this survey thinks Governor Rochas Okorocha is only making this suggestion because he’s almost done with his two terms in office as governor; hence he would feel the impact of the salary slash a whole lot less than his counterparts who have just assumed office. Based on this, Emma Mone Sons Greece opined that “Good talk and advice but he should return the 50% of his salaries and allowances he had collected over the years before he should be taken seriously. Our leaders like sweet talk to get the common people to support them”.