Jo Daniel
The 82-year-old woman, Alhaja Mistura Ahmodu, who was rescued from a three-storey building that collapsed on Swamp Street, Lagos Island, on Wednesday, is dead. 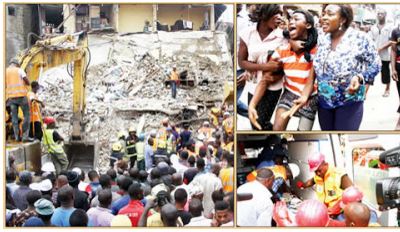 Her granddaughter, Shukura Ishola, told PUNCH Metro on Thursday she died around 5pm on Wednesday at the Lagos Island General Hospital, alleging that medical personnel at the hospital did not attend to her immediately they got there.
Ahmodu had been placed on oxygen and rushed to the hospital after she was rescued from the rubble on the fateful day around 2pm which was five hours after the building had collapsed.

Shukura said: “The doctors in that hospital did not take care of her on time. We were told to buy some drugs and they abandoned her. My brother and I went to get the drugs. When we came back with the drugs around 3.30pm, grandma was still alive.”

“She spoke with us around 4pm. She said she was thirsty and a doctor told us to buy a bottle of drink, which she drank. We were preparing an X-ray on her thigh when everything changed. She died at about 5pm. She was well taken care of at the hospital. She was 82.”

May her soul rest in Peace.