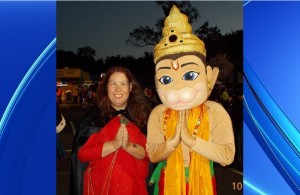 A former Air Force health clinic employee in Maryland, complains that she was fired because of her Hindu background and for not being a Christian. Former Air Force contractor Deborah Schoenfeld, who worked at the Epes Dental Clinic in Fort Meade, said that she was accused of being a witch and bringing demons into the office while listening to Hindu music and meditating.

The dental clinic claims that the dental technician was fired for using profanity in the office against one of her coworkers. Schoenfeld claims that the clinic never identified the worker she allegedly offended. Schoenfeld said that she was the target of religious harassment due to her Hindu background.

She was accused of witchcraft and bringing demons into the office. Schoenfeld was criticized for practicing yoga and meditation, and for being uninterested in participating in Christian rituals.  Schoenfeld was allegedly banned from listening to Indian music in the workplace. Two of her former coworkers, admitted that the woman had been referred to as a Hindu witch by workers of the clinic.