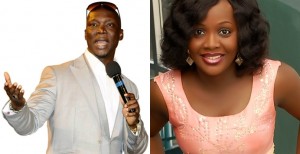 They are into the business of yabbing each other so this shouldn’t be anything too serious, right???

Anyways, it didn’t go down well with Gordon’s when Helen Paul took a jab at I go dye, Basketmouth and Ali Baba at the AY live show in Port Harcourt recently.

It was payback as Gordons went up on stage, he immediately started throwing harsh darts back at Helen Paul.

This led to the female comedienne coming back on stage give him back more words and curses.

It took the intervention of the Host AY himself coming to the stage and practically carrying Helen Paul off the stage.

When Gordons refused to let the sleeping dogs lie, AY announced on stage that Gordons has been banned from AY shows.