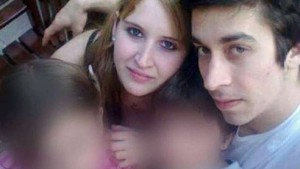 Claimed to have earlier reported cases of their parent abusing them and also the two children they had together, 11-year-old twins. The killings happened in a family home in the city of Pilar, in the east Argentine province of Buenos Aires. A 25yrs old man named Leandro Acosta has admitted he murdered his parents because his step father Ricardo Klein had abused him and his 11-year-old siblings.

According to Scoop, Leandro Acosta, killed mum Miryam Kowalczuk, 50, and stepfather Ricardo Klein, had sex with their bodies and then ate some of their remains, He then cut up the rest and burnt it before feeding it to the family’s six dogs. Investigations reveals that Acosta was helped by his stepsister Karen Klein, 22, who had become his lover. They claimed to have earlier reported cases of their parent abusing them and the 11yrs old twins they had together. So they waited until the twins were at school before carrying out the killings

According to the victim’s brother, Roberto Klein. “My brother was a difficult man, with little time for his children, there has always been resentment between him and his stepson and I believe this was a long time coming.”

Acosta’s defence lawyer, Monica Chirivin, said: “He does not feel remorse and in fact describes a state of relief for a burden he has felt since childhood. He told me that he ate a bit of the corpse. For him it was almost a pleasure.” The crime was discovered when a relative of the victim notified the police after he grew suspicious when he was not allowed entry into the family home.