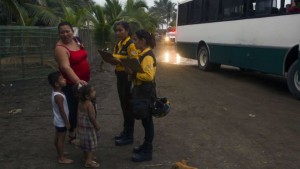 The strongest hurricane recorded in the Western hemisphere is bearing down on Mexico’s Pacific coast, threatening a “potentially catastrophic” landfall. Mexican authorities have begun evacuating residents ahead of the arrival of Hurricane Patricia. The hurricane is comparable with Typhoon Haiyan, which killed 6,300 people in the Philippines in 2013, the World Meteorological Organization says.

A state of emergency has been declared in three states in Patricia’s path. The category five hurricane is expected to make landfall on Friday afternoon or evening, with winds of 200mph (325km/h). The US National Hurricane Center said Patricia was “potentially catastrophic” and the strongest storm it had recorded in the eastern Pacific or the Atlantic.

Some 400,000 people live in vulnerable areas, according to Mexico’s National Disaster Fund. The hurricane, which will bring torrential rain, could trigger flash floods and mudslides, the US centre said. It also warned of potential flooding from the sea and destructive waves. The hurricane’s winds are strong enough “to get a plane in the air and keep it flying”, World Meteorological Organization spokeswoman Claire Nullis said.