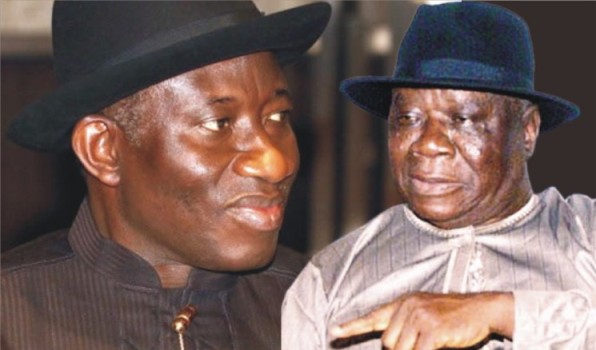 A former Federal Commissioner of Information and leader of the Ijaw nation, Chief Edwin Clark, has dismissed insinuations that he betrayed former President Goodluck Jonathan, by reportedly saying that the former president lacked the political will to fight corruption, noting that he was maliciously misconstrued.

Clark, who came under fire notably from Reuben Abati, former spokesman to Dr. Jonathan, over the statement, also denounced claims that his decision to quit partisan politics was as a result of the ex-president’s defeat at the polls.

In a 3,902-word letter, the elder statesman exonerated himself from the various allegations of betrayal levelled against him, adding that close associates of the former president and some party leaders sold Jonathan out.

He further defended Jonathan’s anti-corruption record, noting that attempts to probe former Heads of State, who were implicated in high profile corruption cases, was frustrated by some officials in the former administration.

His words: “My statements on President Jonathan and my quitting partisan politics were wickedly, sensationally presented.

“It must be admitted that President Jonathan was very willing to fight corruption, but he believed that due process should and must be followed otherwise he could have initiated investigations into the scandals of Halliburton, Siemens and other serious alleged corruption charges levelled against some former Heads of State and other prominent Nigerians.

“Jonathan believed that there are institutions set up by the government, such as the Economic and Financial Crimes Commissions, EFCC, and other anti-graft agencies.

“Regrettably, some of those who surrounded him led by the Attorney General, Alhaji Hassan Tukur, made it impossible for these institutions to work either by stopping them from arresting offenders or prosecuting some of the cases.

“Over 50 high profile corruption cases are still pending in the various courts for over eight years now. Laughable plea bargains and out of court settlements became the order of the day.

“It was at this juncture, when there was general complaint about the government not aggressively fighting corruption, that I addressed an open petition to the then Chief Justice of the Federation, Justice Dahiru Musdapher, November 2 , 2011, complaining that most of those charged to court, especially former governors who have become senators, were still pending.

“He promptly replied my letter on November 3. Most of the petitions written against some prominent Nigerians, addressed to the anti-graft agencies, did not see the light of the day.

“Ironically, the perpetrators of these corrupt actions were the same persons who attacked Jonathan’s inability to eradicate corruption.

“It is indeed most disingenuous to insinuate that my relationship with the former President was based on what benefits accrued to me. That is far from the truth as I never benefited any material thing from President Jonathan in all his six years as President”.

Chief Clark also clarified that throughout the Jonathan Presidency, contrary to public perception, he never sought nor got any government contract, oil block lifting allocation or financial gratification from the ministries, departments and agencies, MDAs.

“Similarly, I never solicited for appointments or special placements for any of my children or relations in any government or private concern on account of my relationship with President Jonathan.

“It is, therefore, ludicrous and totally ill-motived for these wicked and mischievous persons to sell to the public that my decision portends a plan to seek any special favours from President Muhammadu Buhari and his government, or to protect those gains which I acquired from Jonathan’s government, which never existed”, he said.

The Ijaw leader explained that on the contrary, his public service in this country, which spans over 60 years, had given him the opportunity to seek the political, social and economic development of the people of the Niger Delta and Nigeria in general, adding “I remain committed more than ever before to the economic, political and social emancipation of the people of the Niger Delta, South-South, the entire minorities and the development and unity of this great nation”.

Clark also noted that his support for Jonathan goes as far back as when he was deputy governor of Bayelsa State and did not just start when he became president as erroneously believed in some quarters.

“So, for people, who are thinking that I only knew Dr. Jonathan when he became the president or that I was one of his hangers on, I think there will be need to give them a little information”, he stated.

“I still believe that Jonathan performed creditably well in various areas. I am very proud of him and so are millions of other Nigerians.

“He did many good things for this nation. Ordinarily, at my age and position in life, I should not have to justify myself in a press controversy on my voluntary decision to quit partisan politics, particularly when this personal and well-intended act has come under unfair politicization of persons of mediocre temperament”, Chief Clark said.