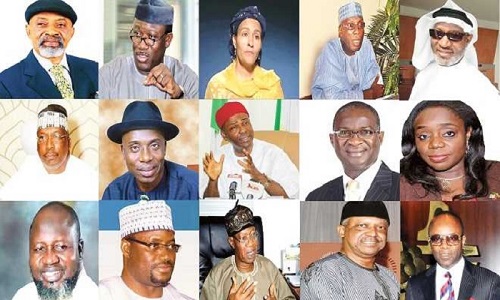 Following the formal unveiling of 21 ministers-designate by the Senate last Tuesday, the pan-Igbo socio-cultural group, Ohanaeze Ndigbo, has warned that the Igbo would not accept less important political offices under the present dispensation.

The group pointed out that not only the South-East geo-political zone but also the entire Southern part of the country, had been short-changed in terms of appointments initially made by the President Muhammadu Buhari administration since its inception.

The newly elected Presi­dent of the Ogun State chapter of the pan-Igbo group, Ichie Iwuoha Uzodinma, stated this at the weekend while speaking with newsmen shortly after his inauguration in Abeokuta, the state capital at a ceremony attended by del­egates from the 20 local gov­ernment areas of the state.

According to Uzodinma, the Southern part of Nigeria has been placed at a disadvantaged position with the initial alleged lopsided appointments which favoured only the North.

He, however, warned that the South-East would not accept any attempt by the Buhari administration to pacify the Igbos with less important po­litical appointments such as ministers of state.

The Ohanaeze leader stressed that Buhari, as the presi­dent of the Nigerian federation, should strive to be fair and just with regards to the sharing of political appointments to all sections of the country.

He said, “From the appoint­ment so far made, I don’t think any Ibo man has benefited from anyone, not even the South generally. The South-South and South-East did not vote for change because they knew that the change would not benefit them. South West voted for change but the type of change being preached in the North is not what the South-West wanted and now the change has come. Eighty per cent of the appointment is tilted towards the North. The South for now remains at a disadvantaged position”.