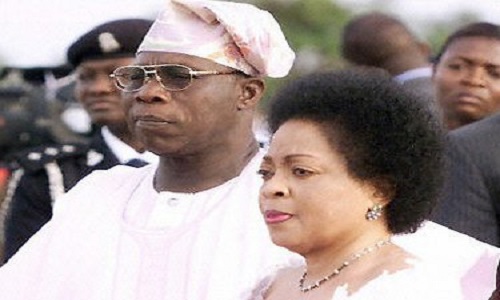 Former President Olusegun Obasanjo on Saturday recalled fond memories of life with his late wife, Stella, who he said he would continue to miss greatly.

Speaking at the 10th memorial service for his late wife at the Chapel of Christ the Glorious King within the Olusegun Obasanjo Presidential Library (OOPL), Abeokuta, the ex-president said the tribute he had written about her in his autobiography ‘My Watch’, tells it all.

“I won’t say much about her today because much had been written already in my tribute about my late wife in the book, ‘My Watch’ and part of it says ‘she will be dearly missed by me, my family and the Abebe family’”, Obasanjo said.

Speaking on behalf of the Abebe family, Mr. John Abebe said their sister and daughter would be missed.

For the Deputy National Chairman South of the All Progressives Congress (APC) and former governor of Ekiti State, Segun Oni, the late Stella was a quintessential woman, who was born and raised in a family reputed for humility and integrity.

The APC chieftain, who spoke with reporters at the reception, said his close interaction with the Abebe family gave him a rare insight into the late Mrs Stella Obasanjo, whose pedigree, he stressed, could not be over-emphasized.

The officiating clergy and former Aso Villa Chaplain, Pastor Yussuf Obaje, in the memorial service sermon titled “Keep her memory alive”, described the late First Lady as an epitome of womanhood and urged the family to continue to keep her legacy alive.

For Senator Ben Murray Bruce, the late Stella Obasanjo was an unusual and global woman, who contributed her quota to humanity before her demise

Stella died on October 23, 2005 during a botched cosmetic surgery at a hospital in Spain.