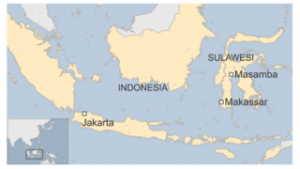 A search is under way for an Indonesian passenger plane carrying 10 people that lost contact with air traffic control over Sulawesi island. The Twin Otter aircraft, owned by the Indonesian domestic airline Aviastar, lost contact soon after taking off from the Masamba airport, officials said.

The plane was heading to the provincial capital Makassar with three crew and seven passengers including two babies. Indonesia has a patchy aviation safety record. There have been three major air disasters in the past year, including the loss of an AirAsia plane in the Java Sea last December that killed all 192 people on board.

Transportation Ministry spokesman Julius Barata told BBC Indonesia that the Aviastar plane lost contact with air traffic control about seven minutes after take off. A rescue team has been sent to search for the plane.

In July, a military transport plane crashed in a residential area of Medan,Sumatra, claiming 140 lives. A month later, a plane carrying 54 people on boardcame down in the remote West Papua region.