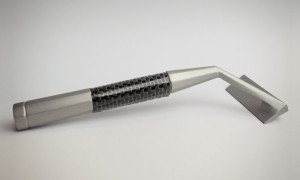 Thanks to a couple of Swedish entrepreneurs, it might soon be possible to get a clean shave without the little nicks and cuts. They’ve done away with blades in their new invention ‘Skarp’, a futuristic razor that magically makes hair fall away when waved over skin! Oddity Central reports:

Well, it’s not exactly magic. Skarp uses laser beams to assist in hair removal. The concept isn’t new, lasers have been used to eliminate body hair cosmetically and medically since 1989, when Morgan Gustavsson invented the IPL (Intense Pulse Light). He also wanted to bring lasers into everyday hair removal, but he couldn’t really do it before because the wavelengths could only cut through dark hair, not light or grey hair.

But now, Morgan and his partner Paul Binun claim to have discovered a part of hair molecules called chromophore shared by all humans irrespective of hair color. Chromophores can be cut easily with a particular wavelength of light. So they used the discovery to develop a commercial laser razor that can be used on any part of the body, by men and women. Skarp is currently being funded through Kickstarter, where it’s being marketed as “the first ever razor, powered by a laser, for an irritation free, incredibly close shave.” The page states: “At first glance, the Skarp Razor looks like a traditional razor. But that is where the similarity ends. The Skarp razor is powered by a small laser which cuts through hair for an incredibly close shave without irritating or damaging the skin.”

“2 billion razors or razor heads are thrown away each year in the US alone,” the makers added. “Due to the hazardous nature of the blades, they can’t be sorted no individual municipality or district produces enough to make specialized collection cost effective. So they end up in landfills & garbage dumps.” All that can be avoided with Skarp, which doesn’t even need water to function. Skarp has become immensely popular even before it has hit the markets. The campaign has surpassed its goal of $160,000 and has now amassed over $2 million, with over 10,000 backers!