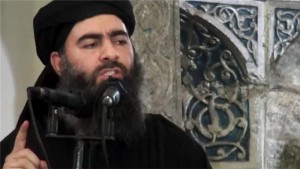 Iraqi security forces say they have struck the convoy of Abu Bakr al-Baghdadi, the leader of the Islamic State of Iraq and the Levant (ISIL) group, in an air strike near the country’s border with Syria. “The Iraqi air force carried out a heroic operation targeting the convoy of the criminal terrorist Abu Bakr al-Baghdadi,” Iraq’s security forces said in a statement on Sunday.

“His health status is unknown,” it said. Pentagon officials told Al Jazeera that they could not “corroborate or confirm the Iraqi government claim of striking or killing Baghadi at this point”. Iraqi security sources have previously claimed several times that Baghdadi had been injured or killed in strikes but the claims were either never verified or later denied.

The army statement said Iraqi aircraft struck Baghdadi’s convoy as it was “moving towards Karabla to attend a meeting of the Daesh terrorist leaders”.

Daesh is an Arabic acronym for the ISIL group, which last year proclaimed a caliphate straddling Iraqi and Syria. Karabla is located on the Euphrates river barely five kilometres from the border with Syria. The statement did not make clear when the strike was carried out.