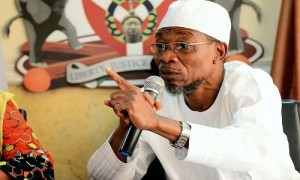 The people of Iree, Osun State have gone spiritual in a bid to stop the planned relocation of the state polytechnic located in the community.

Reports making rounds said that the state governor, Rauf Aregbesola plans to relocate the state-owned tertiary institutions, including the polytechnic.

Residents of the town, including leaders and chiefs, as well as Christian and Islamic clerics, during the weekend, gathered at the town hall for the prayer session, where they prayed that God prevents the governor from doing “anything that will be inimical to the progress of the town.”

During the prayer session, some students arrived with placards to register their displeasure with the proposed restructuring.

After the conclusion of the prayers led by the pastor in charge of the Baptist Church, Iree, Rev. Simon Akintoye Omotoso, and the Deputy Imam of Iree Central Mosque, Alhaji Sulaimon Adeyemo, the community spokesperson, Alhaji Fasasi Olatoke, urged the governor to exercise restraint in his proposed plan to merge the Osun State Polytechnic, Iree with another tertiary institution in the state.

The residents expressed worries that if the state government should carry out the alleged proposed merger, the Osun State Polytechnic Iree, would go into extinction, with the attendant negative implications for the town’s socio-economic life.

“The Osun State Polytechnic, Iree, should remain in Iree and fully run by the state government for the educational, social and economic development of the community and the state at large,” Alhaji Olatoke said in a press briefing.