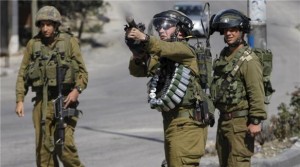 The Israeli government has ordered the deployment of hundreds of soldiers to cities across the country to help police combat a rise in stabbing attacks.  The army deployed six companies on Wednesday to the country’s urban areas, two weeks since the latest tensions between Palestinians and Israelis turned violent. Aljazeera reports:

The move is the first implementation of measures decided upon by Israel’s security cabinet to combat a series of Palestinian shooting and stabbing attacks against Israeli civilians and soldiers.

The cabinet met late into the night and released details of the new measures early Wednesday morning. Steps approved include allowing police to seal off Palestinian neighbourhoods in East Jerusalem.

“The security cabinet decided several measures to combat terrorism, notably authorising police to seal off or impose a curfew on parts of Jerusalem in case of friction or incitement to violence,” the security cabinet said in a statement.

Speaking on the deployment of soldiers, Al Jazeera’s Mike Hanna, reporting from West Jerusalem, said the country had never formally moved to deploy troops in Israel proper.  “This is unprecedented in many ways, to actually deploy formally Israeli soldiers on the streets alongside police officers,” he said.