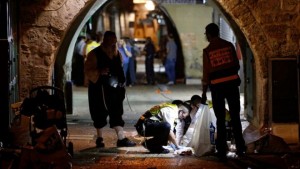 Two Israelis have been killed and three injured in separate attacks in Jerusalem by Palestinians who were then shot dead by police. Police have now banned Palestinians from East Jerusalem from entering the Old City for two days. The latest violence comes two days after an Israeli couple were shot dead in the West Bank.

Israeli Prime Minister Benjamin Netanyahu is to hold emergency talks with security officials on Sunday. The restrictions will stop Palestinians from entering the Old City unless they live there. But Israelis, local business owners and schoolchildren will be allowed in. The first stabbing incident took place on Saturday evening, just after the end of the Jewish Sabbath, close to Lion’s Gate in the Old City.

The two Israelis killed were Rabbi Nehemia Lavi, 41, a resident of the Old City, as well as 21-year-old Aharon Bennett who lives in a West Bank settlement. The Palestinian man – named as Mohammad Halabi, a 19-year-old law student from a village near Ramallah in the West Bank – attacked Mr Bennett, his wife, their two-year-old son and baby daughter who were on their way to pray at the Western Wall in Jerusalem’s Old City, the Israeli foreign ministry said in a statement.

Rabbi Lavi, a reserve officer in the Israel Defense Forces (IDF), was killed as he tried to defend the family, the ministry said. Mr Bennett’s wife was seriously wounded, while their son suffered minor injuries and their baby was unharmed, it added.​