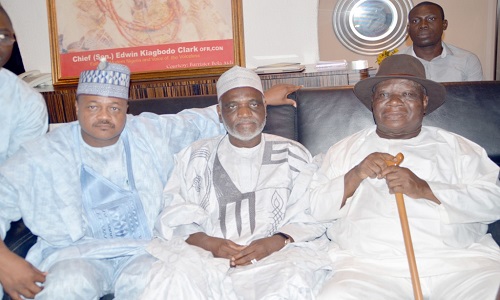 Leader of the Ijaw nation and former federal Commissioner for Information, Chief Edwin Clark, on Wednesday carpeted former President Goodluck Jonathan for lacking the political will to fight corruption while in office.

In contrast, he applauded the President Muhammadu Buhari administration’s fight against corruption, cautioning against labeling the ongoing anti-crusade as ‘sectional or selective justice’.

The frontline Ijaw leader also announced his retirement from partisan politics just as he said he had quit the Peoples Democratic Party but will not join the governing All Progressive Congress.

Clark, who spoke while hosting the Think Nigeria First Initiative group, who visited him at his Asokoro Residence, Abuja, said Jonathan meant well for Nigeria but lacked political will to tackle corrupt politicians in the country.

He said, “I have joined the group of those who don’t belong to any political party anymore.

“I no longer belong to the PDP. I won’t go to the APC either, but I will continue to talk as an elder statesman and leader of this country. I have left politics.  If anyone comes to me to say he’s running for any elective position in PDP or APC, I won’t support you. I’m not a member of the PDP anymore.

“I’m a true Nigerian. I have Muslims in my house even though I’m a Christian. Boko Haram is a problem of all of us and we must fight it together”.

He reiterated his support for Buhari’s quest to fight corruption and urged Nigerians to support him.

According to Clark, “It is not everything done by the opponent that is wrong. I will therefore support the policies that are for the good of the country because Nigeria belongs to all of us.

“Nobody should distract Buhari from fighting corruption. People should stop talking about sectional or selective justice.

“Jonathan didn’t have the political will-power to fight corruption. He’s too a gentleman. Drivers of yesterday are living in palatial buildings now under his government. In advanced countries, when you are living above your means, people query you. That’s not so in Nigeria. Former governors and lawmakers are now asking for immunity.

“Jonathan meant well for this country, but the will power to fight corruption was not there.

“That is not the kind of country that we want. Being a gentleman is not enough to govern this country”.

While thanking the Think Nigeria First Initiative for their courtesy visit, Clark declared his support and encouraged the initiative to keep thinking Nigeria first, ahead of any personal, ethnic or political sentiment.

Tsani stressed that the initiative was conceived to midwife sincere channels of reconciling Nigerians and Nigerian State with a view to protecting strategic national values against inadvertent distortion of such values.