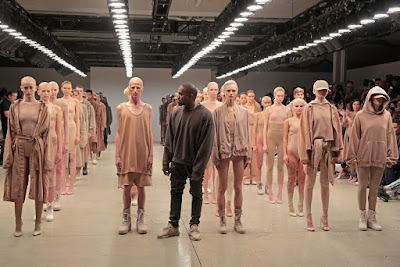 In an interview with Showstudio, rapper Kanye West said he believes he’s being discriminated against by the fashion industry because he’s not gay as he tried to further his career in fashion.

“I feel like I got discriminated in fashion for not being gay,” the 38-year-old said during a two-hour liveinterview with SHOWstudio

‘In music, you definitely get discriminated in music if you are gay. It takes amazing talents to break down barriers,’ West said.

‘Everyone thought that when Frank Ocean dropped that it was going to be bad for his career. I feel like it’s so cliché to speak about him as it relates to this subject, but there are people who broke the ground and he broke the ground. The people that break the stereotypes make history.’

‘The first thing I thought about was a black radio show host maybe possibly making jokes because the black culture is generally homophobic,’ said West.

‘Then it was like, “F–k what people say. F–k what people think.” I feel proud to be in a family that has so many people breaking ground for generations to come. I’m still getting acquainted to what’s politically correct [to say though].