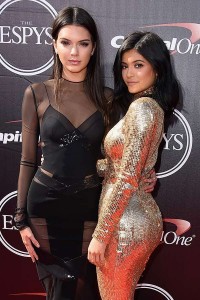 Apparently, Kendall Jenner seems to have finally opened up about her younger sister, Kylie Jenner’s feelings towards her modeling career and says, “she’s jealous of me!”

In the 50th anniversary issue of Cosmopolitan magazine, Kendall confessed that her little sister has been more than a little jealous of the older sibling’s budding modeling career. However, it turns out that the real reason behind that jealousy is the 18-year-old younger sister’s need for attention.
“She’s a Leo so she loves attention, and at certain points when we were younger, it bothered her that I was getting attention in terms of my modeling,” 19-year-old Kendall says of her younger sister.
“I think that’s a natural younger-sister thing, to be jealous. I was jealous of her at times too!”
But while the minor sibling rivalry may have reached a high when Kendall’s work picked up, it seems like the sisters have managed to squash any beefs and now show nothing but support.

“Now she loves what I do and supports me,” Kendall says.“She’s very into fashion and always texts me when I’m doing a big show like ‘That is the sickest thing ever! How were the clothes?’ It’s as much a part of her as it is mine.”