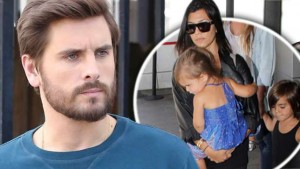 Reports say that Kourtney Kardashian has been forced to put her 5 year old kid in therapy to help him deal with his dad’s horrible behavior.

According to reports, Scott allegedly screams at his children and acts childishly when he’s around them – Mason, Penelope and Reign – to an extent that Kourtney is worried about the safety and sanity of her kids.

“[Kourtney’s] always calling to check on [the kids],” a source told In Touch magazine, while adding that she doesn’t like to leave Scott alone with the baby. “But she really has no choice: She doesn’t want to anger him because who knows what he’ll do.”

Kourtney has reportedly taken charge by placing some rules; Scott’s only allowed to spend time with his two oldest kids on the weekends, and they must be returned home to her no later than 8 p.m. Sleepovers are a big no-no, the magazine further claims.

The source further claims that “Scott barely pays attention to the kids when he has them. He just gives them whatever they want to keep them occupied so they’re not crying. Mason tells her [Kourtney] when Daddy acts ‘mad, sad or weird and Kourtney knows it’s important that her kids see their father, but it breaks her heart to think they’ll remember Scott like this.”