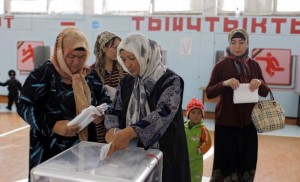 Voting for a new parliament is under way in Kyrgyzstan, with pro-Russian parties looking set to retain their dominance. Polling stations opened at 02:00 GMT on Sunday, with ethnic tensions, the economy, corruption and security concerns among the election issues in the former Soviet republic. Aljazera was there:

More than 2,000 candidates representing 14 parties are running for the 120 seats in parliament. Voting will conclude at 14:00 GMT with the composition of the new assembly expected to be known shortly thereafter. The likely winners are the Social Democrats, who led the outgoing coalition and are still close to President Almazbek Atambayev, even though he formally stepped down as their leader after being elected in 2011.

For the first time, Kyrgyzstan is using biometric data to prevent voter fraud, but fears about how the data could be used means some residents have not registered, preventing them from taking part in the poll.

Speaking at a recent public event, Atambayev promised a clean election. “The goal of the president and the government when they hold fair elections is a fair vote count, so that all votes given to this or that party were fairly counted, so that there would be no ballot stuffing.