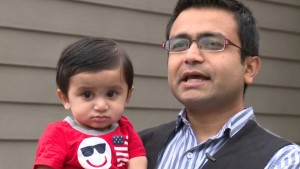 Seattle, Washington is one of the most expensive places to live in America. It’s also one of the healthiest—which is why one landlord decided to offer his tenants a very specific coupon.

Jinesh Varia doesn’t eat meat, and he’s currently landlord for a (by all appearances) lovely townhouse he’s renting out in a Seattle suburb. According to a report by K5 News, Varia will be offering tenants a $200 monthly discount if they stick to a vegan or vegetarian diet. He believes that vegetarian diets are the right way to go “ethically and morally.”

“I really believe, just like the no smoking policy that all landlords have today, that we can promote this as a way to spread awareness. See if I can create a trend,” he told the station.

While Varia has no plans to look through anyone’s garbage, he’s hoping that people will leave their meat at the door — so he can reward them with a rent reduction. In a city where one bedrooms average around $1,615 a month (you don’t want to imagine what that’ll get you in Nebraska), big discounts can make a big difference. Check out Varia’s story below.