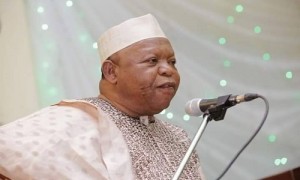 National Chairman of the All Progressives Congress (APC), Chief John Oyegun has advised the people of Kogi State on how to become free from poverty.

Speaking on Saturday at a rally in Lokoja in support of the APC governorship candidate, Abubakar Audu, Oyegun urged the people of Kogi to vote out Gov, Idris Wada, as the election was an opportunity for the people to end years of bad governance in the state.

“The state is still stuck in the failed promises of transformation,” Oyegun said.

He disclosed that the APC was targeting 80 percent of the votes during the governorship election, pledging that it would bring about total change in the lives of the people.

In his remarks, Audu promised to work for the progress and development of the state. He said he was on a rescue mission to save the state from total collapse.

He promised to adhere to the principle of rotation by being the first governor to give effect to the arrangement.

Audu also promised to settle all outstanding workers salaries and allowances, and ensure justice and equity in the distribution of projects.

The APC national chairman was accompanied to the rally by national officers of the party, Governors Rochas Okorocha, Tanko Al- Makura, Samuel Ortom and Sen. Rabiu Kwankwaso, as well as two deputy governors.