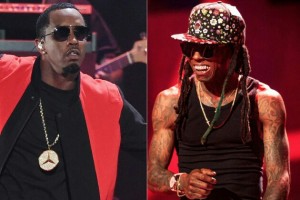 Superstar rapper Lil Wayne and millionaire businessman and rapper, Diddy’s entourages were involved in a fracas in Miami on Sunday night.

The incident reportedly happened when Lil Wayne and his entourage approached Diddy and his posse in the VIP section.

Diddy’s security said they needed to search Wayne and his group, this pissed Lil Weezy off, he spilled his drink on the body guard and both started shoving each other.

Ironically, the nightclub is the same place Diddy reportedly got into a fight with Drake over the “0 to 100″ beat.

Wayne and Diddy eventually settled the uproar , they shook hands and carried on with their night.