Prior to recent developments, electricity has always been one of the major issues we face in Nigeria – an issue which affects all industries and hospitals are not exempted from this. I can’t imagine what will happen if there is a power outage while surgeons are in the middle of an operation… 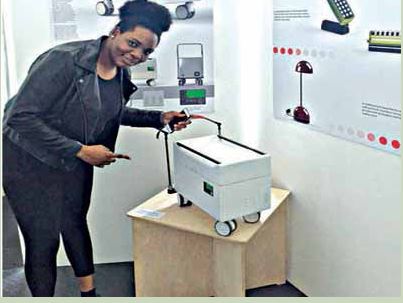 I could go on and on about how unpalatable the issue is but that’s not what this post is about…. This post bears encouraging news about a female Nigerian student studying at the University of Derby in the United Kingdom who developed a device to help in the event of a power outage in an operating room.

21 year-old Louise Jaiyeola Oduyoye developed a mobile medical battery called Neva which provides backup electricity to surgical theatres. The device is rather similar to the regular UPS (uninterruptible power supply) but is more dynamic in that it can be adapted to advanced situations. Neva contains replaceable lithium ion battery packs with enough power output to power critical machines during surgeries and reduce the risks associated with power outages.

Louise Jaiyeola Oduyoye is a Mechanical Engineering student at Loughborough University where she is pursuing her Master’s degree. Neva was a product of her completion of the requirements for obtaining her first degree in Product Design Engineering at the University of Derby.

In a comment about her invention, Louise said Neva was “developed for countries that have difficulty accessing uninterrupted power supplies so they can perform these surgeries in-country rather than fly people out.”

We can only hope Neva will be produced en masse and will be made available to hospitals in developing countries to help save millions of lives.