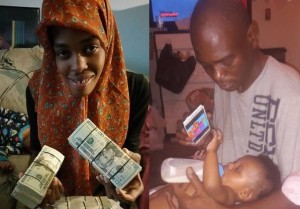 Police are looking to arrest three men on a charge of murder after allegedly killing a man who posted a picture of his wife holding $60,000 in her hand on Facebook, police in Pennsylvania said. Philadelphia police said that 50-year-old Tony Harris of Kingsessing, was killed as a result of the photo after three armed men raided his home looking for the $60,000.

According to the police investigation, Harris took a photo of his wife Amber Crane, holding a pile of cash. He wrote that he lost $60,000 and hopes that his wife doesn’t use the cash for shopping. Exactly one week after the image was uploaded to Facebook, the three men entered his home and tried to rob him at gunpoint. One of the three robbers shot Harris in the head for not handing over the cash. The couple’s young children were home at the time of the incident.

Harris lived in the same neighborhood for many years and never locked his doors, police said. Police said that the suspects are teens, and they offered a $20,000 cash reward for information leading to their arrests.